A Book at Last

“Fiction is art and art is the triumph over chaos… to celebrate a world that lies spread out around us like a bewildering and stupendous dream.”

People often ask me where I get the ideas for my writing. The first thing I say is, “What I choose to write about needs to consume me, to gobble up every ounce of my attention, because a novel takes ages to finish.”

When I began this book, I knew I wanted to document my grandmother’s stories. A born storyteller, Grandma reminisced in her later years—talking our ears off, depicting her life on the Saskatchewan prairie in the 1920s and 30s. She described practical things: the hardship of surviving without electricity, indoor plumbing or refrigeration, how they churned butter, made cheese, built ice houses, and brought in the crops. I peppered her anecdotes throughout the narrative.

My other obsession, at the beginning, was classical music—in particular Niccolò Paganini (1782-1840). He was the rock star of his age and it occurred to me that humans have changed little in the past 200 years. Superstars existed in 1820, as they do now. Paganini was a sensation, touring Europe, performing to massive crowds of adoring fans. He’s remembered today because, along with the hype and showmanship, he was also a brilliant composer. What better person for my central character to identify with?

A friend once told me the story of her grandfather who fled Prussia to settle in Canada with his family. “He was a lunatic,” she said. Her candid tale initiated a multitude of ‘what ifs.’ What if you were insane in the early 1920s, a time when people had little tolerance for and a tremendous fear of mental issues? What if you were isolated from your culture? What if the people around you had no patience or inclination to help?

So, I made my protagonist a classical violinist who fixates on Niccolò Paganini and suffers from bipolar disorder. From that point, the original ideas seeded, sprouted and took on a tentacled life of their own as the story developed.

“The modern man thinks that everything ought to be done for the sake of something else, and never for its own sake.”

When my novel comes out, I hope you’ll pick up a copy. And, a few words posted to Ingram Spark, Apple, Amazon, or Goodreads, could help me find more readers. That is my ultimate quest. 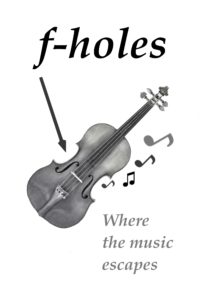